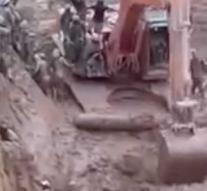 paramaribo - A discovered gold vein in Suriname leads to a bizarre run in the area. A video from De Ware Tijd newspaper shows that hundreds of people are displaced in the mud for a lump of gold.

The new vein was discovered last week by a company in the Tapoeripa area in Brokopondo. Since the news became known, prospectors flew from the surrounding area to the 'pot of gold'.

'In view of the way residents of the environment and others behave around excavators, according to some, it is a matter of time before killing or serious accidents occur', writes the newspaper.

The videos show that groups of young men are digging around the excavators in the loosened earth and mud pool. They quickly fill bags of ore filling in the hope of winning gold later.

Wendell Asadang of the political party that he has called the responsible minister, according to the newspaper.