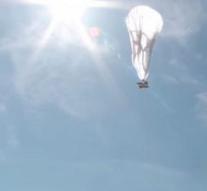 - Alphabet, known as Google, has signed an agreement with three Indonesian telecom companies offering internet in remote areas via balloons. According years the first few hundred balloons into the sky.

Project Loon sends via solar- powered balloons about 5,000 meters into the sky to allow wireless Internet access at a speed of 10Mbits / per second in places where there is no internet. For this purpose are the balloons via radio waves in contact with antennas on the ground.

Google will work together with Telkomsel in Indonesia, XL Axiata and Indosat to provide all 250 million people on the internet. The more than 17 000 islands constructed country has still a long way over a wide network. Only one in three people would have access to the internet.