Home / World / Glennis Grace: 'As if you were struck by lightning' 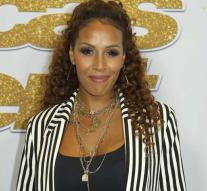 - 'Elegant, brilliant, fantastic.' Judge Simon Cowell summarized the performance of Glennis Grace in America's Got Talent last night. The Dutch sang the song Never Enough from the movie The Greatest Showman from 2017 in the famous Dolby Theater in Los Angeles.

The nerves came into the program five minutes before the singer entered the stage, which is usually viewed by some eleven million Americans. 'Then suddenly it is as if you are struck by lightning, that's how it feels in my body', she tells us immediately after the show. 'Then my harst battle goes very fast and it feels like a big energy bomb. 'After her performance that came out. 'I was shaking a lot at the time. Tyra (Banks, the presenter, ed.) Held my hand and that was a good thing. If she had let him go, I might have gone, so much came to me. '

Glennis fully enjoyed the performance, which lasted 90 seconds. 'I've been here for ten days and have lived like this. But then it is another day and another day. And then it's finally time, and it's really like that. It felt great, I can not say anything else. '

That's what the jury of the program thought. Simon Cowell, Heidi Klum and Howie Mandel gave her a standing ovation. Only Mel B remained, but the former Spice Girl indicated during the comment that she too was hit. 'You have me in tears', the British said, after which she still criticized Glennis's clothes. 'But please never wear that jacket again. '

The Amsterdam, who during her participation in America's Got Talent is not responsible for her outfits, had a meeting with Mel before she went on stage, which was not open to the public. 'She told me that I had done really well. 'I really love you,' she cried. 'But really throw that jacket away.' '

The singer had no problems at all with that comment. 'I think I had eighty outfits. They did not come out. Actually, I agree with her about this jacket. It is just a little good. 'Now that Mel has said something about it, Glennis is determined to make her opinion more valid. 'There were so many people with opinions, maybe I should just be clear what I want now. If I continue, of course. '

During the live broadcast of the program, a film was shown for the performances of the twelve participants in which the candidates tell something about themselves. The singer did not see her clip in advance. 'Did they broadcast it where I cry?' She asks in astonishment. 'Damn! I have not tried to cry so much, but they are so good at those interviews, it seems like therapy. And in the end they had me. '

The American public has until Wednesday evening (local time) to vote for the candidates. Although it first appeared that Dutch people could also express their preference on the site of the NBC channel, it turned out yesterday that this is only possible in America. And that is of course a shame for the Dutch candidate. 'I heard from so many people in the Netherlands that they intended to vote, and that is not the case now. I am equally pleased with all the support from my own country, but those extra votes had been nice. '

Whether the Amsterdam is through and on 4 or 11 September in the semi-final state, so Wednesday night. 'Of course I will still call people to vote via social media, but it also feels like it is out of my hands. I tried my best. It is now up to America. '