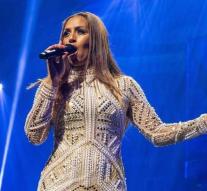 los angeles - Singer Glennis Grace impressed in the quarterfinals of America \u0026 # x27; s Got Talent. The Dutch sang the song Never Enough from the movie The Greatest Showman. The jury and the audience were enthusiastic about Grace's performance.

Judge Simon Cowell called the performance 'brilliant'. According to Howie Mandel, another juror, this performance had 'the absolute wow! Factor'. The only criticism came from Mel B. She did not like the black and white striped jacket of the singer. ' You can never do that again. 'Grace agreed to it with a smile.

In the night from Wednesday to Thursday it is announced whether Grace will proceed to the next round. She needs to get enough votes from her American fans. The Dutch can not vote by a geoblock.