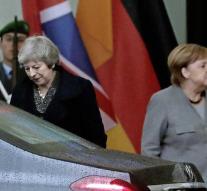 berlin - Germany will no longer surrender any nationals to Britain after the brexit. Whether the British leave the European Union with a hard or soft Brexit does not make any difference to the German decision...

According to the newspaper, Germany submitted an official opinion last week to the European Commission. The notification mentions mutual concerns between the UK and the EU regarding the enforcement of their security cooperation at the current level after the Brexit.

Britain is scheduled to leave the EU on 29 March.