Home / World / Germany is struggling with assistance in dying 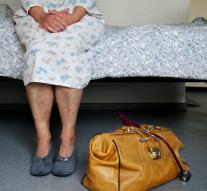 - ' Professional ' help in dying is banned in Germany in the future. To this end, the Bundestag Friday after an emotional debate in majority decided. Associations, companies or individuals may die aid no longer offer the service.

Gets a terminally ill cancer patient dying through ' corporate' road access to a lethal dose of medication, there is a maximum penalty of three years' imprisonment imposed on the person supplying them. Friday of the 602 votes cast, 360 were for the bill, 233 MPs voted against.

Opponents of the law warn that the new rules make it completely unclear for physicians or they may offer assistance in dying or not. " We do not want there to be the deathbed prosecutors, but doctors and relatives ", stated Vice President of the Bundestag, Peter Hintze, Friday. Also, the patient's self-determination is affected, they say.

Co-founder Michael Brand (CDU) argues that the law is necessary to prevent people forcibly end their lives. " Our bill does not criminalize doctors. " Alternatives such as a ban on providing assistance in dying by organizations or persons acting for profit, it did not make it Friday.

It is expected that the German Constitutional Court will have to comment on what exactly is meant by the term ' commercial ' that is included in the section of the law.