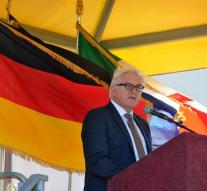 - Germany has had more and more a part of the EU member states when it comes to the reception of refugees. Foreign Minister Frank-Walter Steinmeier said Tuesday that it was " not possible that four or five EU countries receive 90 percent of the refugees."

" The right to asylum is not only a German fundamental right, but if I remember correctly it is a fundamental European value ", said a sore Steinmeier. The German minister says a lot of criticism in the asylum case focuses wrongly on Brussels. He expects true of the EU Member States more commitment and more " a willingness to jointly crisis ".