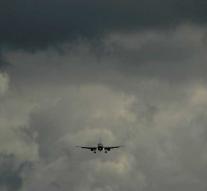 toulouse - A German airplane that was on its way to Toulouse crashed in the south of France. The two occupants were killed. According to the prefect of the Tarn department, the aircraft crashed due to the unknown cause in the vicinity of the village of Marnaves, about 60 kilometers northeast of Toulouse.

A rescue helicopter from the police found the burning wreck of the two-seater in an uninhabited and difficult to access area. The killed pilot was identified Tuesday night, but his nationality was not confirmed despite the German-sounding name. The device had a German registration number.