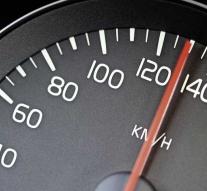 frauenfeld - A 34-year-old German threatens to enter a Swiss cell because of speeding. He ravaged Frauenfeld at 249 kilometers per hour on the A7, said a police spokesman on Monday. Ter...

Such a serious violation of the speed rules applies in Switzerland as a crime. In addition to a gigantic, income-dependent fine, there is one to four years in prison. The perpetrator had to hand in his driving license and is in pre-trial detention. His car was seized by order of the Public Prosecution Service.

The German may not call himself a record holder. In 2010 the Swiss police got a Swede that drove 290.