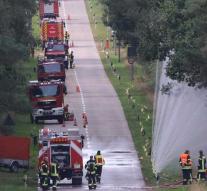 mep - The German armed forces assist in extinguishing the large heathland fire at the German town of Meppen, not far from the Dutch border. Among other things, Tornado fighter planes and transport aircraft are deployed, reports local media.

The Tornado's have heat cameras. The aircraft can thus detect underground fireplaces that are otherwise difficult to discover. The armed forces are also responsible for the outbreak of the fire, which is the result of a missile test. The fire rages in an area of ​​approximately 8 square kilometers.

Minister Ursula von der Leyen (Defense) will visit the area on Saturday. She speaks among other things with the fire brigade, which has deployed about a thousand troops to fight the fire. The minister has previously apologized to all people in the region who suffer from the fire.