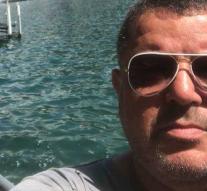 genoa - Dutchman Malik just escaped the disaster that occurred on the suspension bridge near Genoa.

He was traveling by car with his wife and two children from Milan to Genoa.

They planned to spend a few days at the sea and then drive on to Monaco.

'We drove towards the bridge and a quarter of an hour before collapsing we saw an outlet center along the highway. We decided to stop by. Bizarre, because a few minutes later we read that the bridge we would have driven over later had collapsed. '

According to Malik, the news is slowly starting to penetrate the Italian outlet center. 'Everyone who reads it is terribly shocked. People who work here also have a lot of family and friends in the neighborhood. '

Malik and his family are looking for a different destination for the coming days.