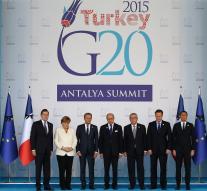 belek - The G20 leaders have condemned Monday in a final declaration, the " heinous " terrorist attacks in Paris and have called jointly combat terrorism.

According to the leaders of G20, it is important to lay the financial sources of the terrorist groups dry by exchanging information about suspicious transfers, freeze the property and threatening to heavy and targeted sanctions. " terrorist networks must be hit in their wallets ", said the President of the European Council, Donald Tusk.

The leaders also argue that much attention must be paid to use the Internet in preparing terrorist acts and the threat of Syrian fighters who return.

In addition, the refugee crisis was discussed. The G20 called on everyone to share the care of the refugees.