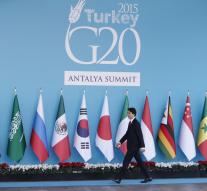 antalya - The G20 countries see migration as a global problem that must be solved by all the countries. This is stated in the draft declaration of the G20 summit which takes place this weekend in Antalya, Turkey.

In it, the leaders of the twenty major economies believe that all countries migrants will record and will provide humanitarian assistance. This is seen as a victory for Europe and Turkey, which insisted on help in the crisis migrants from countries that are not directly confronted with the influx of refugees. G20 members such as China, India and Russia oppose here.

The final version of the final statement, to be published Monday, to be determined.