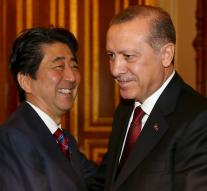 - The G20 meeting in Antalya, Turkey is probably usual. Nineteen economic powers and the European Union are meeting Sunday and Monday. Among the participants are leaders of countries like the United States, China, Russia and Japan.

Host Turkey condemned the attacks in Paris and sees violence as an act against democracy and freedom of all mankind, Prime Minister Ahmet Davutoglu said in a statement.