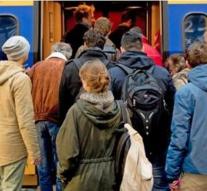 groningen - The train to Groningen on Sunday was so full that the conductor refused to continue. He thought that was irresponsible and halt the train in Zwolle. The boekenweekgeschenk was the culprit. ' That you could travel for free. And everyone apparently wanted to return home at the same time, '' says NS against RTV Noord.

According to the NS has become busier anyway between Zwolle and Groningen by the new timetable. The NS is busy arranging more and longer trains. ' But when that happens, I do not know. That can not be settled within two days. ''