Home / World / Fujimori back into the cell 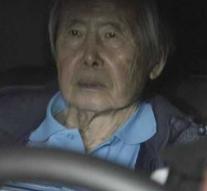 lima - Alberto Fujimori, the former president of Peru, has been returned to prison. There he must still serve the remaining thirteen years of his imprisonment.

Fujimori had previously been released prematurely. In 2017 he received pardon from human Peruvian President Pedro Pablo Kuczynski on humanitarian grounds. He had just escaped a deposition procedure thanks to the support of Fujimori faithful in parliament. The Supreme Court reversed the grace last year. Fujimori subsequently ended up in the hospital.