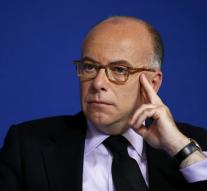 toulouse - The French secret service DGSI has broken up a terrorist plot in Orléans. Two men aged 20 and 24 years Saturday arrested in Orléans. A third suspect who would lead the conspirators, is a jihadist in Syria. This, the French interior minister, Bernard Cazeneuve, said Tuesday on a visit to the southern French city of Toulouse, according to French media.

It is, according to the minister the tenth time in two years that the service DGSI (General Department of Homeland Security) thwarts a terrorist attack. The two suspects in Orléans are known to have raised money for their plan and they went to buy weapons. They had obviously picked a target yet, but they talked about an army barracks or police.

Since December 2010 in the EU are estimated to be over 180 people have been killed in terrorist attacks by jihadists. Among them, 90 percent in France to life, the most last month in Paris.