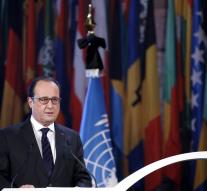 - France wants tougher border controls at the external borders of the Schengen area. The country has formulated a list of measures Friday during slotted meeting of the EU Ministers of Justice and Home Affairs in Brussels Friday, according to British media Wednesday.

Especially the border between Greece and Turkey should be protected more strictly, said Paris. All refugees must be screened before they can enter the EU in order to prevent potential terrorists hiding in the refugee stream. There are indications that certainly one of the perpetrators of the attacks in Paris as a refugee via Greece entered the EU.

France also wants to include faster to introduce rules allowing more information about air passengers in the EU is at hand.