Home / World / France wants to use against terrorists OECD 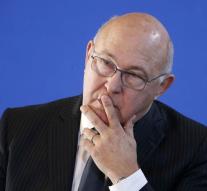 - To stem the flow of funds used by terrorists, more needs to be done to combat money laundering. In order to realize this, thinks the French Finance Minister on the efforts of the OECD, the Organisation for Economic Co-operation and Development.

The OECD has a task force that specializes in the international fight against money laundering. All major European states, but also countries like Japan, the United States, Israel, South Korea and Australia are members of the OECD. After all international endorsements, said Minister Michel Sapin, it is now time for action.

The French aim, inter alia, on the imposing restrictions on the use of the so-called prepaid debit cards. This money can be recorded anonymously. The maximum amounts that may be included to reduce the flow of funds to terrorists may be somewhat contained. Sapin incidentally mentioned no amounts. Currently, each time with such a non-rechargeable card 250 euros will be collected.

In order to tackle money laundering, should be given more powers fighters. France itself has a list of 10 000 suspects, of whom more than half are radical Islamists or people with terrorist links. Sapin wants to ensure that include banks, exchange offices, insurance and art dealers report suspicious money flows. Who with more than 10 000 euro to cross the border, would be if it were up to the minister, in the future require a customs declaration.