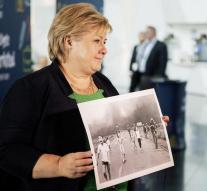 oslo - Facebook is preparing a more cautious when deleting photos and stories. That said a senior employee of the company Monday after a row about a historical photo from the Vietnam War.

Facebook had previously to stick with among others the Norwegian Prime Minister Erna Solberg, after a photograph was removed from a girl crying and runs away naked after a napalm attack during the Vietnam War. Placing the historical figure would have been in breach of the rules regarding nude photos.

Facebook Director of Media Partnerships Patrick Walker said Monday in Oslo that the next time pictures are allowed that are newsworthy or relevant to a wide audience. ' Even if they are not compatible under other circumstances with our standards, '' said Walker.

According to Walker must be prevented to see minors and other people accidentally violent images get where they are not waiting. The company is still investigating how it can best be addressed.