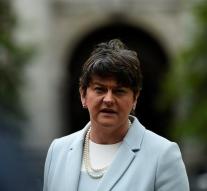 dublin - Arlene Foster urged on behalf of the Northern Irish Democratic Unionist Party (DUP) on a 'sensible Brexit.' She will raise this wish during the discussions with Theresa May on support for the minority cabinet of the British Prime Minister. According to Foster, negotiations with the Conservatives are continued at the weekend.

'We want to see a Brexit that suits everyone, not only in Northern Ireland, but also in the Irish Republic. It's a wise Brexit, 'said Foster against reporters in Dublin. 'I know people like to talk about soft brexit, hard brexit and stuff like that but what we want to see is a reasonable Brexit, one that is good for everyone. '

Foster hopes to reach an agreement with May as soon as possible. The Queen's Speech, the opening of the parliamentary year, is Wednesday. The British queen unfolds in the throne the plans of the new government-May.