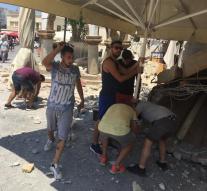 kos - Dutch tourists who left Kos last yesterday are scared of the ravage they find on the Greek island.

'It's quite cool to see,' says Nick, who is on holiday with a group of friends. The Limburg boys look at a heavily damaged mosque in the center of the city. There are large pieces of fragments on the street and a red white ribbon is stretched around the building.

Daan van Leeuwen from Helden also scares when he arrives at Kos yesterday. 'We thought it would be good and everything would have been cleaned up. But everywhere there were people sleeping, except in their own home. You see everywhere rubble and everything was closed. It was just a ghost town. That's pretty fierce to see. '

The group of friends bouts enormously. Initially, they had booked a vacation to the Turkish Marmaris, but there were too few entries. Their vacation was reversed. ' And then on day of departure the whole island is in ruins, 'concludes Daan Sour. 'That's double bad luck. 'He has no good word for the travel organization. 'They were unable to reach yesterday and did not respond to questions. Only when we were at Schiphol, we received an email that was safe. I really feel sewn. '

In the center, space teams start removing large pieces of fragments at the damaged mosque. Out of nowhere, a group of men begins to snatch a big umbrella and throws another man in a hurry. After two dramatic days, the island slowly tries to repack. But the fear of aftershocks is still high in many tourists.

Jan Seegers from the Achterhoek slept on a bed by the pool tonight. 'For safety,' he says. Last thursday night he brings the earthquake. It was an anxious experience, says Jan. The plaster came from the walls. Before the night, the Achterhoeker has already devised a flight plan, if the weather fails. We put a chair under our balcony. Then we can easily escape. '

A Dutch woman who passes admits the men admonished. 'Do not make it too dramatic. People are already hard enough. Otherwise, tourism is completely broken. 'The men look after her rebuilt. 'She certainly did not experience the earthquake,' mumbles Jan. Is he still having fun in his vacation? 'The last day not bad', says traveling companion Benny Kolkman. 'But the fun comes back slowly. '