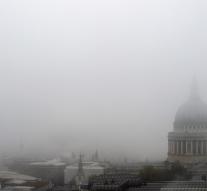 london - Air traffic in Europe for the second day in a row which were hampered by fog. UK airports were the most affected by the foggy weather conditions, which may also persist Tuesday.

The London airports Heathrow, Gatwick and Manchester should significantly reduce the number of flights due to bad visibility. British Airways, the largest airline at Heathrow, said the airport Monday morning only ran on 50 percent of its capacity. EasyJet kept 59 flights grounded. Many flights were delayed.

Also surrounding airports in Europe were affected by dense fog, making them hard or impossible to reach. Besides Schiphol have included Frankfurt, Berlin, Düsseldorf and Brussels.