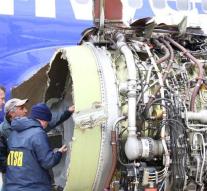 philadelpia - It appears that metal fatigue is the cause of the fatal accident with the aircraft of Southwest Airlines in Philadelphia. That is the preliminary conclusion of the American transport authority NTSB after an initial inspection.

According to a spokesperson, the investigation now focuses on a missing part of the exploded aircraft engine. It would be a rotor blade. About a hundred kilometers north of Philadephia a piece of fragments from the Boeing 737 was found. Southwest has announced the technical state of the fleet. The plane concerned was inspected and approved two days ago. The device has made forty thousand flights since July 2000.