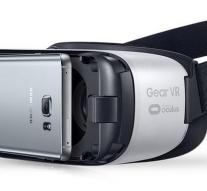 - Photo site Flickr has launched an Android application that allows users 360 degree photos to view. The app is designed specifically for use with the gear VR glasses from Samsung.

The service currently has more than 14,000 such images in its database. Once one is loaded, the eyes of the wearer can look around in a panorama- like landscape by just turning the head. There are pictures of, among other things see the northern lights, but also from the inside of a Russian Orthodox church.The app is free to download and is still only compatible with the Samsung Galaxy S6 or the Note 5, because that support the VR gear.
NEW