Home / World / Flake: FBI report Kavanaugh does not add anything 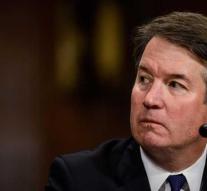 washington - The Republican senator Jeff Flake has not been able to find anything in the report of the FBI that makes accusations against candidate chief judge Brett Kavanaugh more plausible because of sexual assault. 'We have not seen any additional information in support,' he told reporters in the Capitol.

Flake kicked off the federal police last Friday, because otherwise he could not agree with the appointment of the accused Kavanaugh as a member of the Supreme Court. The full Senate must, after each member has read the report on the affair separately by the FBI, finally vote. This happens on Friday or Saturday, depending on how long the debate about the candidacy will last.

The Democratic senator Dianne Feinstein called the result a 'product of incomplete research. 'She strongly criticized the fact that Kavanaugh, his accuser Christina Blasey Ford and several other important witnesses have not been heard. 'The most remarkable part of the report is what is not there,' says Feinstein.

Her Republican colleague Susan Collins, on the other hand, spoke of 'thorough investigation. 'She was one of the moderate GOP people who understood Flake's wish. According to CNN, 95 senators have already formed their opinion. There are five doubters: three Republicans and two Democrats. With a distribution of seats of 51-49, it is not yet a course that has been achieved.