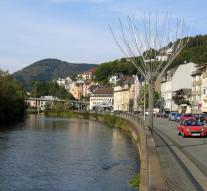 hagen - A 25 year-old German fireman has confessed that he founded together with another fire at a refugee shelter in place Altena (North Rhine Westphalia ) . Also known partner in the interrogations of the police attack on the house last Saturday. The two live in the area of reception.

The firefighter would have topped the roof of the house with gasoline and lit while the other was on the lookout. No one was injured by the fire. The arsonist gave as the reason for his action that he did not want refugees in his neighborhood.