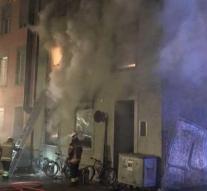 zurich - Six people were killed early on Monday morning by a fire in a building in Solothurn in the north-west of Switzerland. The police reported that an unknown number of people with injuries were transferred to a hospital.

The newspaper Blick reported that the fire raged in a building where several families lived. When the fire broke out, there were about twenty people in the building. There are some children among the dead.

Residents of an adjoining building were evacuated during the fire, but have since returned to their home.

The fire brigade could not say anything about the cause of the fire.