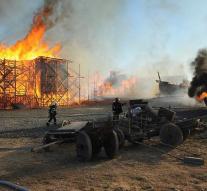 prague - A fire has caused millions of damage to the Barrandov film studios in Prague. A part of the legendary film city was destroyed, including a mock medieval castle and a film set which was supposed medieval Paris, Czech media reported on the authority of fire and police.

Three firefighters were injured in extinguishing. The fire broke out Friday night and was only extinguished Saturday morning. Helicopters were used to pour water from the Vltava over the burning area of ​​about 10 000 square meters.

It is still unclear how to cause the fire.


The film city in the Prague district Barrandov is one of the largest and oldest film studios in the world. Since the thirties were recorded more than two thousand films.