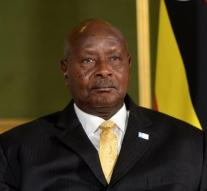 kampala - In Uganda's parliament, fiery fighting was broken and tampered with chairs before a debate on whether President Yoweri Museveni has to get a new deadline. Fights both government and opposition members took part in the fighting.

Before the parliamentary session, the police were already tearing out to protest protesters and activists from the opposition. A leading opposition leader, Kizza Besigye, was arrested after attempting to mobilize protests and march to parliament. Besigye is former physician of Museveni and ex-minister.

Museveni has been president of the country since 1986.