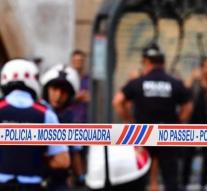 barcelona - The Spanish police arrested a fifth suspect five weeks after the attacks in Barcelona and Cambrils. It is a 24-year-old Moroccan man suspected of buying raw materials for the bombs. In addition, he would have also delivered cars.

The man held close ties with the imam suspected that the brain might have been behind the attacks.

The imam came to life at the explosion of the gas cylinders intended to be used as explosives at the scene. However, the gas bottles flared up too early in a house in Alcanar.

At the attacks in Barcelona and Cambrils, sixteen people were killed. There were also eight terrorists. The terrorist cell would consist of twelve Moroccans from the town of Ripoll and its surroundings.