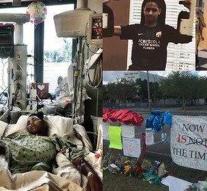 barcelona - FC Barcelona has invited a survivor of the bloodbath in the American Parkland to meet his football heroes. The seriously injured Anthony Borges (15) was also sent a signed competition shirt.

Borges suffered the injuries during the shooting in his school, causing seventeen people to die. The shooter hit the student several times as he tried to lock the door of a classroom. He would have been the last of about twenty young people to enter the room.

The Spanish football club said it was impressed by the 'true hero. 'It is thanks to Borges that the death toll did not turn out much higher, according to Barcelona. The club distributed a video showing how the players, including former Ajax player Luis Suarez, put their signature on the shirt for the teenager.