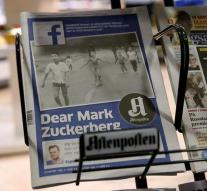 oslo - Facebook will learn from the controversy that arose after erasing an historic photo. That says top woman Sheryl Sandberg. The image of a girl crying and runs away naked after a napalm attack during the Vietnam War, was removed because Facebook felt that it was in breach of its rules regarding nude photos.

Facebook had the pictures among others removed from the profile of the Norwegian Prime Minister Erna Solberg. These are difficult decisions and we're not always be right, Sandberg wrote in a letter to Prime Minister Solberg. Even with clear guidelines is challenging one for checking a weekly millions of messages. We want to do better. We want to listen to our community and develop.

According to Sandberg is the historical significance of such images sometimes greater than the importance of keeping naked outside Facebook.

The photo of the girl Phan Thi Kim Phuc was made on June 8, 1972. She was nine years old. The South Vietnamese army, supported by the United States, had shortly before attacked her hometown of Trang Bang with napalm. The girl was severely burned and quickly pulled out her burning clothes. Nick Ut saw it and took a picture. Then he took pity on the girl.The photo won a Pulitzer Prize and World Press Photo.