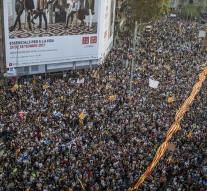 barcelona - The cry of Catalan independence is on the doorstep. This can take place as soon as the official outcome of the referendum is clear. Premier Carles Puigdemont of Catalonia expects the results Friday or weekend.

The Prime Minister announced Wednesday's statement with a statement about the situation.

The Prime Minister announced Wednesday's statement with a statement about the situation.

"Within 48 hours, we can call out independence." Puigdemont told the British Broadcasting Corporation that "no society must accept a state that does not want it." His Catalans no longer accept that they are Spanish. An overwhelming majority of over 90 percent of voters in the referendum do not want to hear from Spain anymore.

"I sought the dialogue, but Madrid did not respond at all," said the prime minister. Should the Spanish government go on holding government officials of the Catalan government, Puigdemont regards this as Madrid's second fault.