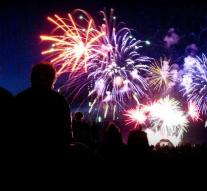 scheveningen - During the International Fireworks Festival in Scheveningen, England won the title 'most beautiful fireworks show' during the country battle. Eight countries had entered into battle at the 39th edition of the event.

The Netherlands, Belgium and Germany showed Friday what they had thought of a spectacle. On Saturday evening China, Japan and Spain arrived. 'Newcomer England took this edition with original elements that have not been shown in Scheveningen before, had the strongest structure and a very good variation,' says Bjorn van Dijl, chairman of the Scheveningen International Firework Festival. Last year, the country title went to Spain.

The arrows were fired from a floating pontoon about 275 meters from the Pier and the beach, near the Kurhaus. The shows were clearly visible from the entire boulevard and the beach.

The festival was held over two weekends. Due to the strong wind the show was canceled last Friday. Last week Saturday were the fireworks shows of Austria and England. According to the organization, an estimated 300,000 people visited the shows.