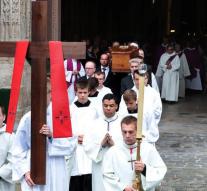 rouen - With an emotional church service Tuesday, France has bid farewell to the murdered priest Jacques Hamel. Two Islamic terrorists brought the 85-year-old cleric last week to life in his own church near Rouen.

In the cathedral of Rouen gathered according to French media nearly 2,000 people, including religious dignitaries and French Interior Minister Bernard Cazeneuve. Many people stood in the rain for the church.

The archbishop of Rouen, Dominique Lebrun, welcomed the presence of Muslim and Jewish worshipers at the funeral. Attendees were heavily protected. The funeral was after church in closed family circle.