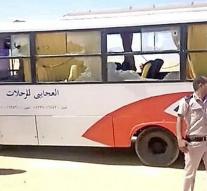 cairo - The Egyptian army has conducted air attacks on terrorist camps of IS in neighboring Libya. The bombing is a reaction to a bloody assault on a bus full of Christians, with about 28 people returning, most of them children.

Libya is a brook of muslim terror, where also the family of the abuser in Manchester comes from. Yet, the attacks are striking as most terrorists active in Egypt have their base in Sinai. President Al-Sisi does not rule out any further actions.

Muslim terrorists sank yesterday, on the eve of Ramadan, for the third time in half a year dead and perished under the Coptic minority in Egypt. The extremists were masked and dressed in army outfits when they crossed the bus, on its way to a monastery with three SUVs, and opened the fire on the occupants.

Army or police were not aware of any fields or roads, even though the government promised to tighten security after the last terrorist action. The state of emergency is in force in Egypt.

IS has been focusing on headlines since last year, which make up about 10 percent of the population in Egypt.