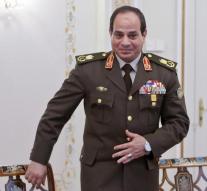 cairo - The Egyptian parliament agreed with the transfer of two uninhabited islands in the Red Sea to Saudi Arabia. President Abdel Fattah al-Sisi has to put his signature under the decision.

The Egyptian government announced the transfer of Tiran and Sanafir last year. That led to a storm of protest. A judge ruled in January that the government could not prove that the islands of Saudi Arabia are. That sentence was reversed in April.