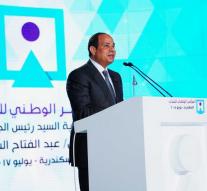 cairo - Egypt is not planning to recuperate economic and diplomatic ties with Qatar. The blockade remains in force and Egypt will not recall, Egyptian President Abdel Fattah al-Sisi said Monday, despite international pressure to resolve the conflict in the region.

Four Arab countries (Saudi Arabia, UAE, Egypt and Bahrain) broke out relations with Qatar in June because of alleged support for international terrorism and close ties with Shiyan Iran.

Sanctions have also been issued which are only withdrawn if the Qatar government complies with a list of thirteen requirements. Among other things, the countries want the government in Doha to maintain less close diplomatic relations with archival rival Iran and Al-Jazeera news channel.

Qatar denies itself to be guilty and says that the boycott is based on lies and nonsense.