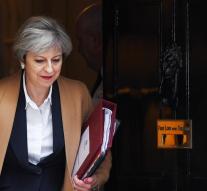 belfast - The Northern Irish Party DUP has confirmed that it is going to talk with the Conservatives of Prime Minister Theresa May about possible cooperation. According to her spokesman, the conservative leader wants to form a minority government with DUP support in the House of Commons.

The DUP, which seems to be able to count on ten seats, may help May to a nipte parliamentary majority. DUP leader Arlene Foster confirmed at a short press conference that she spoke in the morning with May. 'We are going to talk with the Conservatives to see how we can bring stability to our country,' she announced.

SEE ALSO: May: New Government and beyond with Brexit