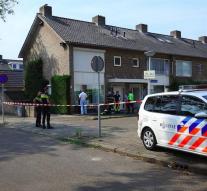 finish - According to Mayor John Jorritsma, the drug lab discovered Friday in a house in Eindhoven could cause a major disaster. 'There were so many dangerous substances that a fire or explosion destroyed not only this house, but a large part of the district,' Jorritsma responded Tuesday. He has closed the house on the Heydaalweg for at least one year.

The whole house was used for xtc production. Based on the large amount of acetone and hydrochloric acid that was present, the police estimated that millions of xtc pills were produced. At the time of the invasion there were about 200,000 pills. In the house, the police also found substantial amounts of drug waste and MDMA, the active substance in xtc. Two men were arrested.

The mayor is shocked by the discovery. He calls it unacceptable. He calls citizens to report if they have suspicions or suspicions about this kind of labs. 'I understand that this can be scary, but that can be anonymous,' said Jorritsma in a statement. 'It's all hens on deck, you need to help us to tackle this. ''