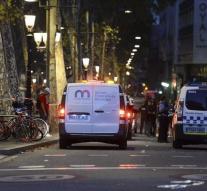 barcelona - The fugitive 22-year-old Younes Abouyaaqoub was behind the wheel of the van used at the Barcelona attacks. That told the Catalan authorities at the newspaper El Periódico.

The 22-year-old man would have fled out of the van on a rally on the Ramblas, then set up sunglasses and went into the crowd. Presumably he has fled through the market hall, the Boquería, which is on the Ramblas, reports El País.

Abouyaaqoub is the only one of the 12 suspects of the attacks still being sought. The other suspects were detained, shot by the police or killed by an explosion in a house in Alcanar south of Barcelona.