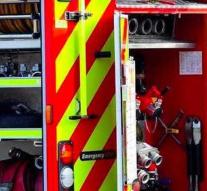 stafford - Four children were killed in a fire in the English town of Stafford near Birmingham. Two adults and a child were taken to hospital with injuries. Their…

The ages of the victims have not yet been announced. The fire started around half past three local time last night. The house has partly collapsed. More than fifteen firefighters managed to bring the fire under control.

Family members and local residents receive support from social workers. The police investigate the cause of the fire.