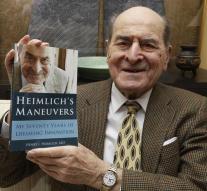 cincinnati - The famous inventor of the Heimlich maneuver, Dr. Henry Heimlich, in Cincinnati in the US state of Ohio deceased. He was 96 years old. That made his family famous, writing local media. Heimlich died in the local hospital of complications following a severe heart attack on Monday.

In the 70 acquired the doctor known for his so-called Heimlich maneuver, a technique that you can open with abdominal thrusts airway of a choking person. Heimlich also had previously been engaged in saving the lives of others. In 1962 he invented the Heimlich Chest Drain Valve, credited with saving scores of lives on the battlefields of the Vietnam War and the emergency rooms across the country. Nearly a decade earlier, in 1955, he got name recognition with an operation that replaces a severely damaged esophagus of a patient.

Heimlich's career was dogged by criticism. Especially from his immediate environment. Doctor Edward Patrick, an employee's Heimlich, who died in 2009 already claimed for years that he would co-inventor of the maneuver. One of his four children, Peter, is an outspoken critic of his father. He has a website that 'the medical Heimlich fraud' exposes.