Home / World / Dozens of IS followers get grace 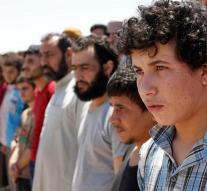 raqqa - Dozens of detained Islamic state supporters were released on Saturday by the rebels fighting in Syria against the terrorist organization. The intended future government of the official IS capital Raqqa decided to give 83 former jihadists a pardon.

The prisoners were transferred by bus to the headquarters of the Raqqa City Council (RCC), the organ that Raqqa should drive when insurgents have conquered the city. The RCC was founded in April by the Arab and Kurdish allies of the international coalition against IS.

Although Raqqa is still in the hands of the terrorist organization, the RCC decided, as a goodwill, to release a number of IS members. It's not about high-ranking jihadists or people with 'blood on their hands,' promised an RCC driver.

The prisoners were given candies in the village of Ain Issa, north of Raqqa, on Saturday after their bus trip. They were told to be re-enrolled in society and get back to school again.