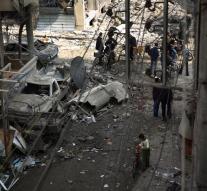 douma - At least 45 people have been killed by a rocket attack on a market in the Syrian city of Douma, near Damascus. Hundreds of people were injured, the Syrian Observatory for Human Rights reported Friday.

According to the Observatory launched the Syrian army twelve rockets on the market.

The Observatory operates from London and relies on reports from activists and witnesses.