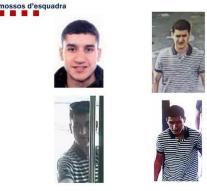 barcelona - It is the case for the Spanish police that Younes Abouyaaquoub, the unaccompanied suspect of the attacks in Catalonia, has killed a 34-year-old Spaniard after entering Barcelona on pedestrians.

As a result, the death toll rises through the terrorist actions of fourteen to fifteen.

The Catalan authorities reported on the newspaper La Vanguardia that Abouyaaquoub fled the Spaniard to steal his car.

By reducing fingerprints and DNA research, the Spanish authorities have been able to find out the identity of the 15 victims killed. It involves six Spaniards, three Italians, two Portuguese, a Belgian, an American, a Canadian and an Australian.