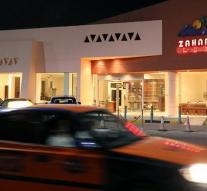 cairo - The two German women who were killed in a resort in Egypt on Friday were permanently resident there, according to DPA press office.

The attacker swam from a public beach to the Zahabia Hotel. There he stabbed the Germans and two other people. The victim injured another two people at the nearby Sunny Days El Palacio resort. The man was arrested. There is nothing known about his motive.