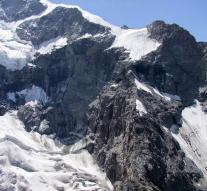 zurich - Rescuers are in a remote valley in the Swiss canton of Graubünden looking for eight people who have disappeared after a landslide. According to the authorities, there are people from Germany, Austria and Switzerland.

The authorities evacuated about one hundred people from Bondo village and emergency workers saved hikers who had fled to mountain huts in the area. The earthquake Wednesday caused large amounts of mud and rock to move.

To detect the missing people, a military helicopter was deployed.