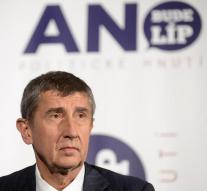 prague - The Czech Finance Minister Andrej Babis Tuesday tried to appease the outrage that has been raised about his bagatelliserende statements about an extermination camp the Nazis for Roma. Babis visited the camp in Lety and laid flowers there.

,, I reject the atrocities that have taken place here definitely off, '' said the leader of the liberal-populist government party ANO. Earlier, he described the concentration camp at Lety,, as a labor camp. ',, Who did not, who was sent there with a shovel, '' said Babis. Then friend and foe fell over him. Prime Minister Bohuslav Sobotka urged a reconciliation visit.

According to historians brought the Nazis during World War II in the camp more than three hundred Roma died. Another five hundred were transferred to Auschwitz. Today, pigs are held, what Babis Tuesday,, unhappy '' said.